The unveiled mirror: an exhibition by Marco Martz

“Finally here we are: an exhibition that I have been waiting for so long in a place that I have always loved and followed. Saturday 19 September, from 10 to 19, in the courtyard in via Rocciamelone 11, curated by Daniele D’Antonio and Edoardo Di Mauro, for the Museum of Urban Art I will show my latest work. 59 small works in china and acrylic in which to reflect, recognize and overcome oneself. The works will remain visible by appointment in the MAU headquarters from 21/9 to 19/10, Tel 3484500461. You are all welcome! “

On Saturday 19th September starting at 10 am for the whole day, the exhibition of Marco MARTZ LO SPECCHIO UNVEILED, organized by the MAU – Urban Art Museum in an unusual location. I had the pleasure (and the honor) of curating the first ever release of this project by Marco and I am particularly proud of it. Below is the accompanying text for the exhibition, which I have prepared for a project that I recommend that you follow carefully.

The mirror unveiled illustrations by Marco MARTZ curated by Daniele D’Antonio and Edoardo di Mauro @MAU – Museum of Urban Art 19/09/2020 10 am-7pm Exhibition of works in the external courtyard, via Rocciamelone 11 – TURIN The works will be viewable from 21/09 to 19/10 exclusively by appointment at the MAU gallery, via Rocciamelone 7 / c. We live in times in which the concept of evil, in its broadest sense, has been transformed, modified, plasticised, reshaped, exhibited, spectacularized, shown and communicated in an infinite multiplicity of forms. Although our contact with evil is now almost daily, and obsessively, due to the forced assumption of a sort of toxic addiction dose, the outside world continues to offer us infinite variations

It is the supermarket of evil, where sensitivity, empathy, but let’s also say the sense of loss, fear and terror, each of us can find the most suitable “product” for their personal and collective destabilization. It is in this context that if asked what we are most afraid of, each of us would respond in their own way with their own variant: a lethal virus? An illness (any one, there is plenty of choice)? A war? Poverty? Violence? Death in an absolute sense? One, a hundred, a thousand of these voices create a deafening social boom, in which each of us sinks, helpless, unable to distinguish the imprint of himself from that of others, unable to create distinct perceptions, effective defenses, positive reactions. It lies in the progressive silencing of this background noise which, from the very bottom, has taken on the role of the protagonist of the everyday, conquering the proscenium of the tragic work, the filtering and individual re-emergence operation through the illustrations that make up the work of Marco Marz , The Mirror Unveiled.

These are the voices of the choir, which re-emerge in tiny solo cues, well personified by the micro-dimensions of the works that make up the project: each of these cues identifies one and only one timbre, a note, a bar of the choral score. Each of these ideas becomes, in that precise moment, for a very brief moment, the protagonist of the scene. The disconcerting discovery lies in recognizing, on our part, mere spectators of the representation, that that single note of that single element of the choir taken as a soloist is the vision of an inner evil, which we recognize, as it is a declination of personal, inner evil, completely ours and that comes from our personal path of life, independent of all the others, independent of the deafening background noise of the collective evil mentioned above. It is not certain that we will recognize ourselves in all the elements of the choir and therefore of the project: the direct action of the public this time is the solicitation to pause and pay attention to each of the individual voices, to raise that veil that allows the resonance between our part of evil, self-produced, self-supported, self-powered, and what we see represented. The vision of the project thus becomes part of a performance in which the public becomes a fundamental component through the imposed action of dwelling on each single work placed on the ground and semi-visible if not reducing the physical distance, even before symbolic, between the observer and the work itself. It is therefore an image reflected by a virtual mirror, in an exchange of vibrations, rebounds of emotions or memory between the personal interior and the illustrated exterior: it is a forcing and an awareness, an exercise in introspection, a test of strength of intellectual sincerity. Not a small act these days, to reveal oneself through the mirror, beyond any possible form of narcissism. Daniele D’Antonio, September 2020 M.Martz is a designer, he focuses on social themes and tells them ranging from illustration, to comics, to Orgolese-style muralism. He has published for the Eris publishing house, for the Fuori posto column of the newspaper Il Manifesto and for the magazine Polvere. His murals are present in the open-air Museum of Camo, the open-air museum of Loceri, the Museum of the other and of the elsewhere in Metropoliz. 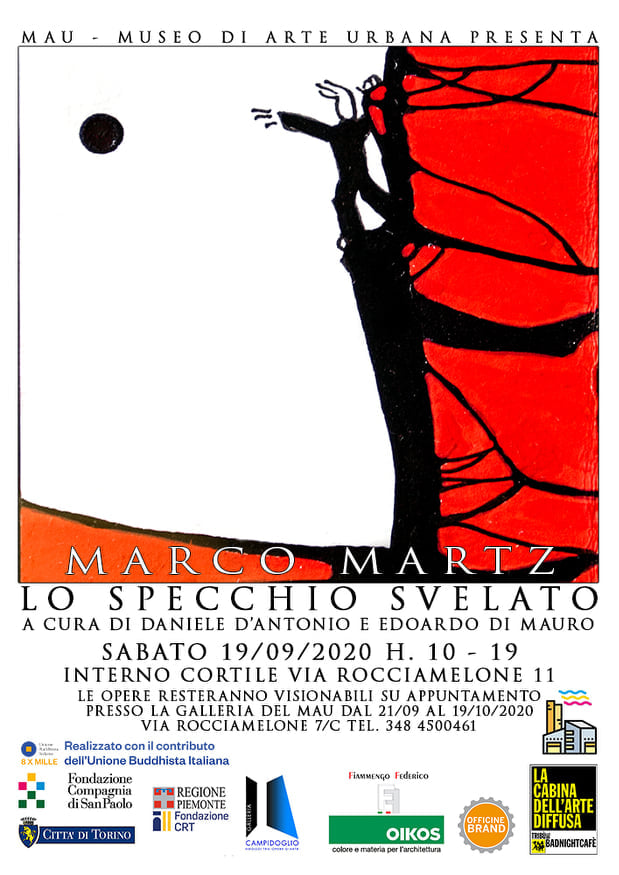 ← SAT_Street Art Tourino_ in Falchera + Drink finale a El Barrio
”Tales of art”, accessible guided tours to the works of the Turin Urban Art Museum Saturday 3 and 17 October at 10 am →

You can book a guided tour accompanied by a licensed guide