– Turin Thirteen years after its foundation, the Tribù del Badnightcafè retraces its activities with an anthology of its projects, through the posters that accompanied them and largely unpublished video material. The screening will take place in front of the premises that house the MAU, Museum of Urban Art, as well as the seat of the Museum itself, at the end of a guided tour that will start at 18.30 with a guided tour by SAT + MAUA + MAU to the works of the MAU in Borgo Campidoglio

To greet with a flourish the summer spent together with # Thursdays with SAT & MAUA, we thought of a season finale in one of the neighborhoods with which SAT has always collaborated: Borgo Campidoglio and its MAU_MUSEO D’ARTE URBANA in TURIN. On the occasion of the #esternonotte event, we thought of a special tour to discover the works of urban art in augmented reality present in Borgata Campidoglio. The appointment is set for Thursday 01 October at 18.00 and will be a pleasant walk around the Borgo as well as the official opportunity to present the latest street art works created in the district under the artistic direction of Edoardo Di Mauro, president of the MAU, who will be with us. The walk will end by sipping a beer at the Dogana Torino, craft brewery, the beating soul of the neighborhood, waiting to admire the video projection on the walls of the MAU headquarters.

The screening is organized by Tribù del Badnightcafè and is part of the initiative launched by Camera_TO:

MAU_ Museum of URBAN Art_ The MAU – Museum of Urban Art is a set of masonry works and other artistic installations distributed among the streets of the Campidoglio, one of the oldest districts of Turin, starting from 1998 and with subsequent contributions over time.

SAT_ Street Art Tourino_ Following in the footsteps of the great European capitals, the SAT- Street Art TOuRINO project was also born in Turin, which consists in the organization of various artistic-cultural paths that develop and wind through the streets of Turin and its province, aimed at making the works of contemporary muralism and street art, created over the years and placed, precisely, on the metropolitan and provincial road network. SAT is a ludo-artistic path aimed at both lovers and neophytes of Urban Art; it is carried out mainly on foot but for sports lovers a type of bike tour has also been designed: the biketour. Tours run from March to November.

MAUA_Museum of Augmented Urban Art An open-air museum, outside the center, to discover surprising works of street art, between the districts of Milan, Turin and Palermo in the less traveled streets of the cities. Zero walls, but many colored walls: welcome to the first widespread museum of augmented street art, a journey through the works of street art, selected by the inhabitants of the neighborhoods themselves. Once on site, the experience continues in digital form: framed with the smartphone, the work is transformed into a work of digital art, animated in augmented reality.

Tribe of the Badnightcafè Cultural Association of Turin. It groups together those who, professionals and non-professionals, intend to propose their own works, projects, works, ideas in the artistic field. Fields of activity: photography, music, literature, multimedia, dance, theater 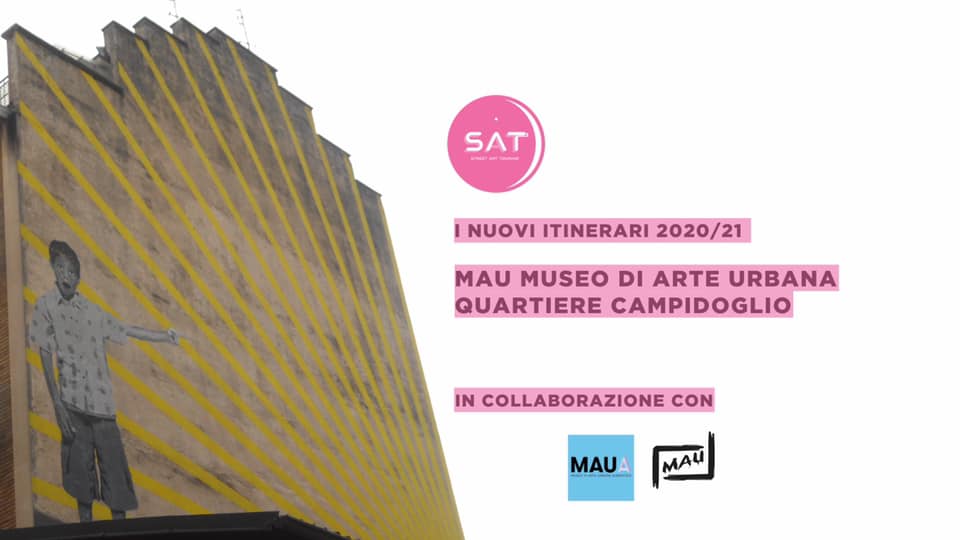 ← ”Tales of art”, accessible guided tours to the works of the Turin Urban Art Museum Saturday 3 and 17 October at 10 am
October at MAU: Night Effect and Art Tales →

You can book a guided tour accompanied by a licensed guide