A weekend of “slow movida” in the Campidoglio district and Piazza dei Mestieri on 19 and 20 September.

German-style craft beers are the protagonists

Thirteen years of beer production at the Piazza dei Mestieri

with tastings, music, meetings with brewers,

From Friday 18 to Sunday 20 September 2020 in Turin, in Piazza dei Mestieri via Durandi 13, an event not to be missed for all lovers of craft beers, especially those inspired by the German tradition.

Keeping in mind the sensitivity of the current situation, Piazza dei Mestieri re-proposes, with due attention to health safety regulations and measures, the public event of Bierfest Platz launched with great success in 2017 on the occasion of the brewery’s tenth anniversary.

The Master Brewer of the Piazza, Riccardo Miscioscia, in addition to having the opportunity to present his products and new brewing proposals, has involved some important brewers who will offer one or more beers, strictly from the German school, representative of their craft production path . The breweries invited represent important craft companies operating on the Italian territory. We will be joined in this fourth edition by: the Torino Brewery, Aleghe, 50 & 50 Craft Brewery, Baladin, Croce di Malta, Mastino, San Paolo and Castagneri.

The three days of Bierfest Platz are aimed not only at beer lovers, but invite the San Donato district and the entire city to participate. The “Food” selection of Bierfest Platz will be curated by Maurizio Camilli and Marco Santelli, respectively chefs of the Restaurant and Pub in Piazza dei Mestieri. The beers will accompany numerous dishes including: hamburgers, sandwiches stuffed with patanegra ribs, beer shanks with potatoes, sausage balls and friarelli and birramisu. Some of the novelties are stewed tripe and mussels with Roquefort fondue and celery. A menu for all tastes, from which vegan burgers could not be missing and, for those who love German desserts, the classic Krapfen.

The party will start on Friday 18 September at 5.00 pm with the opening of the beer tapping systems, followed by the presentation of the event by Eugenio Signoroni (craft beer expert and curator of the Guida Birre d’Italia – Slow Food Editore ). After a brief presentation of the new edition (in which two productions of the La Piazza Brewery are also mentioned in the category: The unmissable beers – the Chagall and L’American Jasper), the public will then be able to witness the opening of a drop barrel at Kellerplatz , the Keller-style beer from the Piazza dei Mestieri.

Saturday 19th September the party continues. Always starting from 17:00 the beers will again be ready to be tapped and the food to be tasted. The program also includes the presentation of another important book for fans of craft beer, but also for those who are still approaching this world.

This is the Atlas of Italian Breweries, co-written by Andrea Camaschella, “Beer Teller”, a real expert in the field of craft beers, together with Davide Bertinotti, “Beerhunter” traveling the world and lecturer in courses of brewing production and culture. Among the 244 breweries described and the 612 beers mentioned for the extraordinary quality and creativity of the Master Brewers, there is also the La Piazza Brewery with four types of beer: American Jasper, Hell Dorada, Kellerplatz and Schwarzwald.

On Sunday 20 September the Bierfest Platz will continue the party and as in the first two days it will be possible to enjoy the new menu, our beers and those of the guest breweries until 24:00.

Good food, music, lots of craft beer, three days and one goal: to entertain all the public present at the Bierfest Platz 2020. 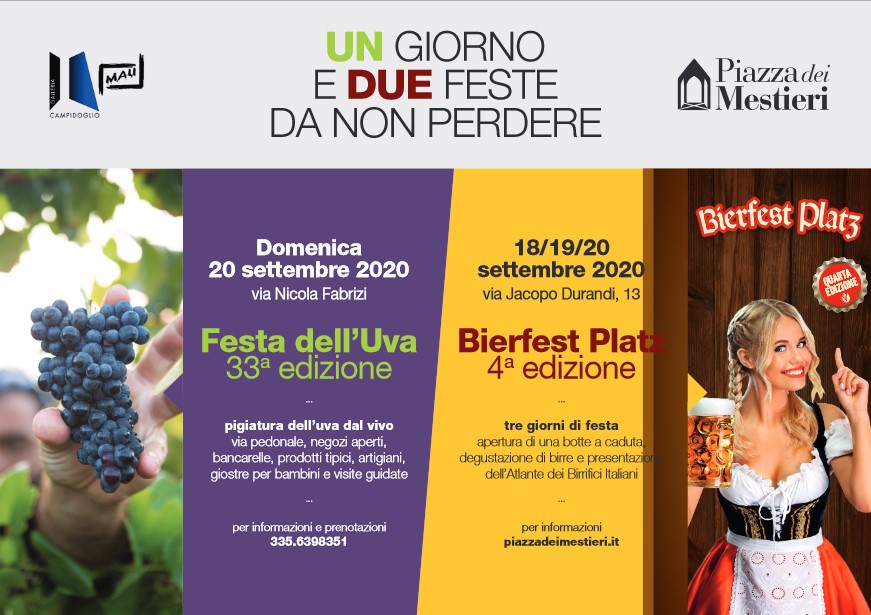